skip to main | skip to sidebar

This project is just too cool for more thn 10 reasons. lets see few of those.
a) Its a film project with a samurai in India (for me this is the coolest reason. In india we dont get to see samurai's in our films last time any one saw a samurai in hindi film that was PRAN playing a SAMURAI. lo kar lo baat).
b) Its got TADANOBU ASANO (Mongol,Itchi the killer,Zatoichi) playing the lead (I so love toshiro mifune and thought any director to have an actor like him is a gift and then i saw tadanobu asano he is just sooo unpredictable and excellent. one should check out the roles he has played...watch him play the bad guy in zatoichi, Ichi the killer...then go and see Mongol. I am a fan of him.)
c) Its a film directred by BHARATBALA. Working with him is really good as he told me only one thing "surprize me". He was very sure of what he wanted and why he wanted it. More fun as he gives you your freedom to perform.
d) music will be done by A.R.Rehman.
e) Film has Kamal Hassan too.
F) Asin as well.
the list can just go on and on and on. You watch the film when it releases.

So this perticular sequence was a training session. so they are not fighting with actual weapons but wooden ones. There were certain bar i was asked to follow. i have not incorporated all the frames from this board. Though it feels like an action sequence its not so...That you shall notice when you watch the film...Again this storyboard was done with a purpose of figuring out elements and props and ideas that can enhance the whole sequence...so you will notice there is no continuty in the props as each frame suggests a different prop.
I enjoyed working on this i wish i had more sequences to work on.
Posted by saumin at 10:42 PM 2 comments: 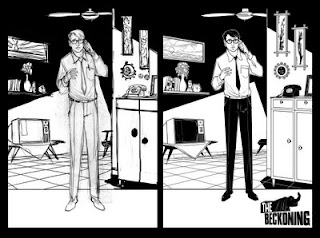 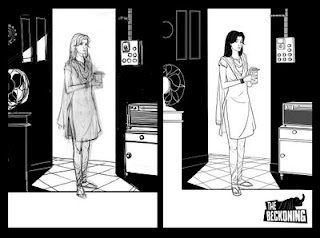 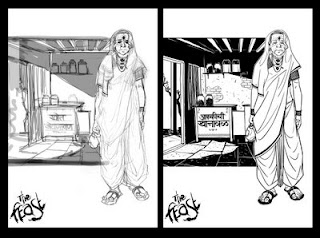 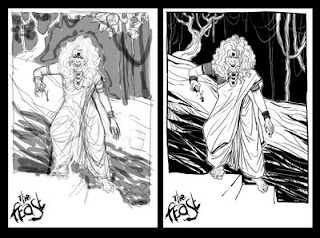 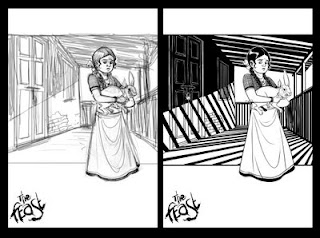 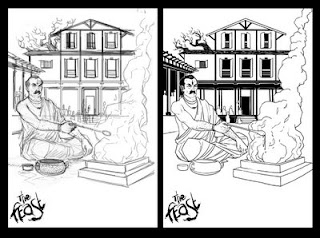 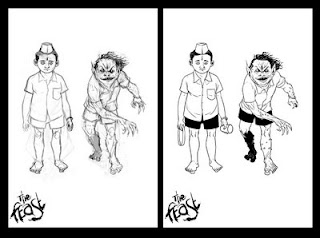 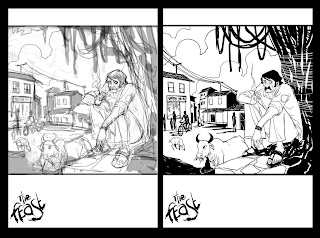 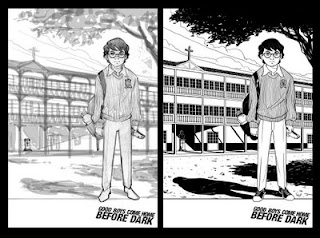 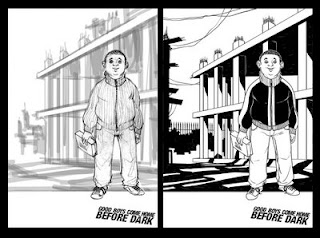 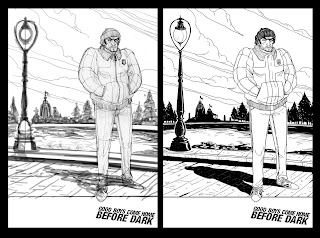 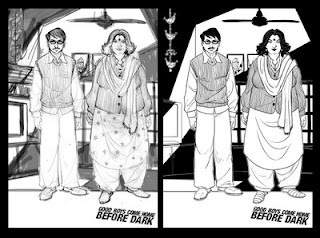 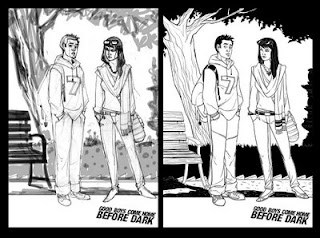 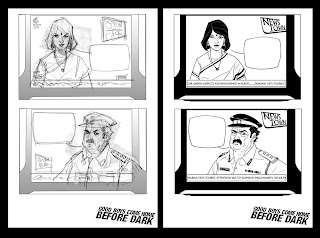 Ratnakar matkari is an exrtreamly popular marathi writer. He has written many kinds of works from horror, slice of life, human behaviour, films, plays etc.He has penned down many short stories which have been adoped in radio shows and later for television.
Some time back Ashish had this idea to adopt his short stories into graphic novel medium. He has been a die hard fan of ratnakar matkari's work. Yogesh our writer heard it and he promptly agreed to work on the script as he himslef is a huge fan of ratnakar matkari. Both of them took lot of effort in taking this project ahead. Communicating with Mr.Matkari, getting his approval for this project, Editing, re editing, all of it to bring the selected 6 stories to final comic book script level. lot lot lot of work to get this project even to this pitch level.

I personally liked setups against which the stories take place. these are uniquely indian. As i got to know about the stories more from ashish and yogesh i really started loving the characters in each story. The old lady, the foodie, the kids, a small villege in rural maharastra, the houses these were some elements which i feel give a very very unique visual flavor to the whole story and it was all there written years back...so all we had to do was follow the guidlines laid in the story and try to reinvent it for today's audiance.

We have chosen 6 stories for this anthology. Total page count comes up to 180 pages. out of this 2 stories will be done by me "The Feast" and "Good boys come home before dark" totalling upto 50 pages for me. I am sure this project is going to be a lot of fun atleast for all of us working on it. Lets hope we get to get this book out fasssssssssssssttttttttt so that all you people can also enjoy it.
Posted by saumin at 9:59 PM 4 comments: 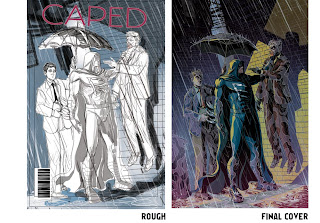 These were 4 covers i did for Boom Comics for their title called CAPED. This superhero story is little bent. Funny in places yet brutal..Ian Brill was editor on this one...Was a good experience working on these as for the first time i worked on the characters designed by another artist.
Posted by saumin at 10:35 AM 2 comments:

saumin
I am based in mumbai and working as a freelance illustrator/concept artist. So far i have provided illustration and animation work for Virgin comics, Grey worldwide, Lowe, Publicis ambience, Mtv,Vh1, Saatchi & Saatchi,Hungama tv etc.